Let me interrupt for a brief second to talk about my latest novel The Deeper Dark, available in print and on Kindle right now on Amazon! The world went on without him while he was a POW, but he’s home now and the only person he has left in his life is being threatened by a corrupt network that was responsible for his capture in the first place. The Deeper Dark available now on Amazon!

Thank you! And now, the article you came to read:

Connie D’Amico, played by Lisa Wilhoit, is a character in Family Guy who is rarely explored for the tragedy that became her life. Of course, she was the popular girl at James Woods Regional High, which might lead you to believe she had a blessed life and everything about her was marvelous. But as you’ll soon find out, her life was far from blessed and it didn’t turn out all that great.

Connie’s heartbreaking tale begins with her high school dance in Season 2 Episode 14 – “Let’s Go to the Hop” – when she’s tricked into going with Peter Griffin. He’s playing an undercover student to get kids off drugs and becomes the most popular guy in school under the fake name Lando Griffin. She might be going out with him because she thinks it’s status quo or she might actually like him, but dating Peter is definitely a low point in her life. The fact that Lois is married to him is a hard pill for us all to swallow in the first place. 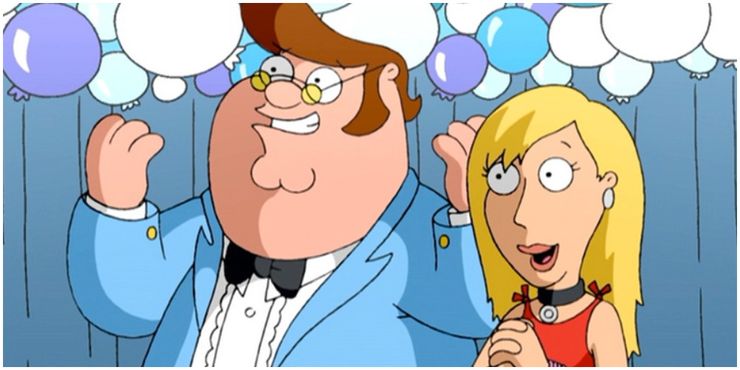 Used again, Connie suffers another punch to her self-esteem when she’s tricked into dating Stewie. Just like his father, Stewie attends James Woods Regional High as an undercover student in Season 6 Episode 8, “McStroke.” In a bet between him and Brian, Stewie has to become the most popular kid in school. He does this rather quickly by saying all the things the popular kids want to hear and of course, he and Connie start going out. Another status quo thing. Their short time together ends when she entices him to have sex with her in the car and sees that he is a little small down there. She tells the school and destroys his reputation. But if you know Stewie, he doesn’t let her get away with it.

Now, she has a record. She bounces back to become the most popular girl in the school again, but she’ll always remember that burn to her character. In Season 7 Episode 13 – “Stew-Roids” – Connie has become bored with her status quo lifestyle going from dating one popular boy after another. She looks at Chris and decides she’s going to start dating him and make him the most popular boy in school. The plan goes well for a while but eventually backfires when Chris gets too full of himself. The popularity got to him.

Having dated all the guys in the Griffin family, her self-esteem was at an all-time low. This is about the time I take you back to Season 5 Episode 8 – “Barely Legal” – when Brian took Meg to her high school dance because he felt sorry for her. After having a few drinks to deal, Brian gives Connie a piece of his mind.

She dates all the guys in the Griffin family, but the dog doesn’t want anything to do with her!

This rock bottom point in her life might have led her to the career decision she made. The last we see of her is in Season 16 Episode 04 – “Follow the Money” – when Chris and Carter enter a strip club chasing a rare dollar bill. There on the stage is the tragic fall of Connie D’Amico. Let me first say that there is nothing wrong with stripping. It has launched the careers of many brilliant ladies in the past. However, when you’re dancing in a dive in a town called Quahog, you have very little chance of picking yourself up from that all-time low.